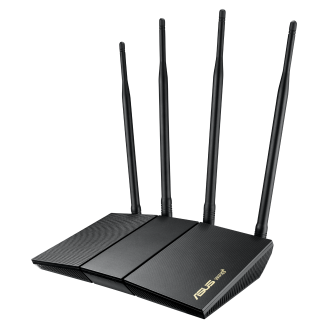 RT-AX1800HP incorporates ASUS AiProtection, a commercial-grade network security system powered by Trend Micro™ Smart Home Network. With AiProtection, all connected devices are protected, even if they have no antivirus capability of their own — such as IoT devices. AiProtection blocks common internet-based attacks before they reach the network, and if an infected device is detected on the network, AiProtection instantly blocks it to prevent it sending any personal information to malicious servers.

In most cases, your can deliver smooth, reliable WiFi to every part of your home. But WiFi coverage can be affected by many factors — room layout, construction materials, and even furnishings. ASUS AiMesh is an innovative new router feature that fixes these problems: it creates a whole-home WiFi network using multiple ASUS routers. AiMesh is powerful, flexible and you can use a mix of ASUS router models — protecting your investment! AiMesh gives you time-saving central control, and seamless roaming capability. AiMesh is WiFi you can rely on — for all your devices, all the time!