LAS VEGAS, USA, January 4, 2022 — ASUS Republic of Gamers (ROG) today announced continuing leadership and technological innovation across the 2022 laptop lineup by introducing Conductonaut Extreme liquid metal compound on flagship models for cutting-edge thermal transfer, as well as through integrating a MUX Switch for increased GPU performance. The Zephyrus and Flow lineup enter 2022 with a brand-new 16:10 aspect ratio, and select models feature the brand-new Nebula and Nebula HDR Displays. For those who dare, ROG continues to offer next-generation technology across the family.


From chassis design to fan choice and custom heatsinks, ROG Intelligent Cooling is a series of improvements powering ROG gaming laptops that work together to provide gamers with the lowest temperatures possible, all without sacrificing acoustics. For 2022, ROG has made a number of improvements to the Intelligent Cooling solution, ensuring gamers get the absolute best performance possible from their machines.

In 2020, ROG began using liquid metal thermal compound on its entire laptop lineup, but the engineering is pushing the envelope once again. The 2022 ROG Zephyrus Duo 16 and Strix SCAR will feature Thermal Grizzly's Conductonaut Extreme, a thermal interface material intended for ultra-high performance scenarios. This compound reduces CPU temperatures by up to 15° C compared to traditional thermal pastes, allowing the machines to sustain peak performance for much longer during demanding workloads. “We teamed up again with the ROG engineers who are very experienced in mass production with liquid metal, and developed Conductonaut Extreme liquid metal, which has about 20% improved thermal conductivity over the original Conductonaut,” said Thermal Grizzly CEO, Roman “der8auer” Hartung.

Select models like the Zephyrus G14 and Flow Z13 come equipped with custom vapor chambers to boost cooling performance. This design has up to 50% more surface area contact compared to traditional heatpipe designs, and covers the major heat-producing components like the CPU, GPU, and power regulation circuitry. With a vapor chamber, even the thinnest and lightest machines can keep themselves cool during the most intense gaming sessions.

Redesigned Arc Flow fans are the final piece of the Intelligent Cooling puzzle. Now featuring a variable thickness design, the 84 blades each slowly taper down to a minimum thickness of just 0.1 mm. This design reduces turbulence, allowing the fans to move more air with lower noise levels than the previous generation.

Taken together, the Intelligent Cooling system provides so much thermal overhead that the machines are easily able to stay silent during light workloads. When in Silent mode with the CPU under 50° C, the fans will turn off completely for truly silent relaxation. When gamers need to get back to the match, the Armoury Crate software will automatically enable the fans again when required. 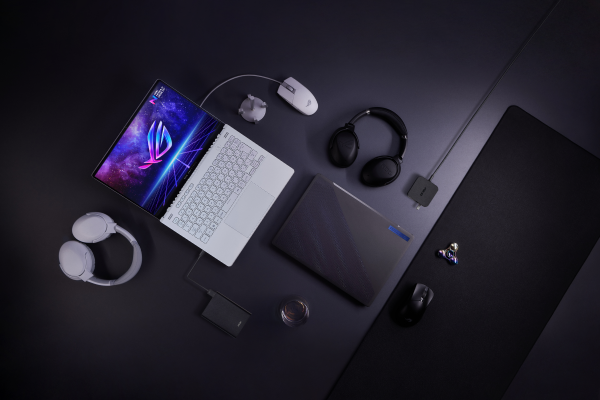 ROG has a history of display leadership. The first brand to bring 120 and 144 Hz refresh rate laptop displays to gamers is raising the bar again with a new class of laptop gaming panels. Called ROG Nebula Displays, they have to meet the most critical criteria for gaming: be fast, bright, and vivid.

The specifications to meet Nebula Display™ qualification are strict. These panels require a peak brightness of 500 nits, 100% DCI-P3 color gamut coverage, Pantone® Validation, as well as Dolby Vision® HDR and Adaptive-Sync support. The panels are TÜV Rheinland™ Low Blue Light and Flicker-Free certified. They also need to hit refresh rates of 165 Hz or higher for FHD and 120 Hz or higher for QHD and 4K resolutions, all while maintaining response times of less than 3 ms. ROG Nebula displays are the ultimate gaming panels, and are featured on the new ROG Zephyrus G14 and ROG Zephyrus Duo.

The Zephyrus Duo’s Nebula panel is even more special, though, since its display is certified as ROG Nebula HDR. This even stricter specification must meet all of the baselines set by ROG Nebula Displays, with some critical improvements. A breathtakingly beautiful HDR panel, Nebula HDR must have an eye-watering peak brightness of 1100 nits, 512 local dimming zones, and a 100,000:1 contrast ratio. VESA DisplayHDR™ 1000 certified, this panel also has a 10-bit color depth, in addition to a bumped up refresh rate requirement of 165 Hz at QHD resolution. ROG is proud to announce the Nebula HDR™ Display as the new standard for laptop HDR gaming. 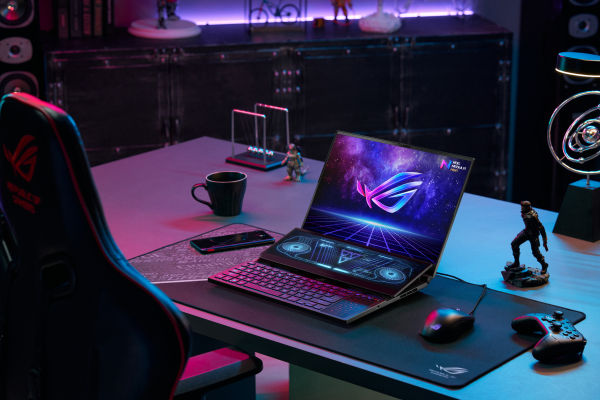 ROG stretched even further to provide gamers a more engaging gaming experience in 2022. All of the new Zephyrus and Flow devices come equipped with 16:10 aspect ratio displays. By narrowing the bezels and adding more screen in the same form factor, these panels provide more immersion than ever, whether gaming or watching movies.

To accomplish this, the Zephyrus G14 adapted the ErgoLift hinge design. By overhauling the motherboard design and trace layout, ROG engineers were able to avoid adding bulk to the chassis or compromising the screen-to-body ratio with a large bezel on the bottom like traditional designs, keeping the Zephyrus G14 ultraportable. 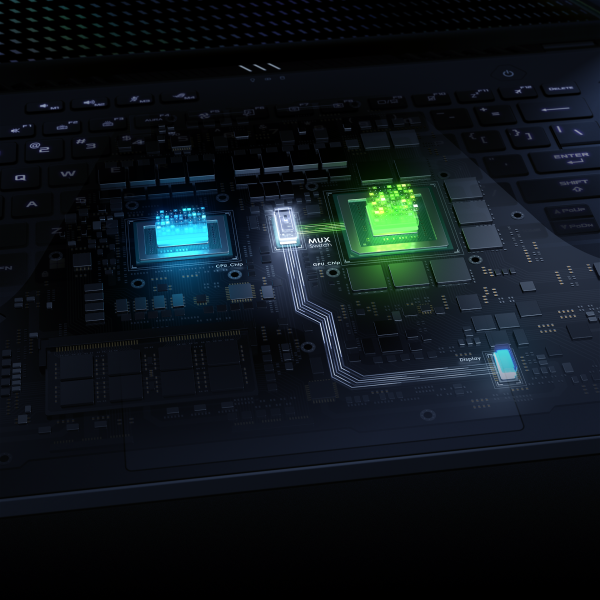 Modern gaming laptops use powerful, dedicated graphics chips for high performance — but most route those frames through the CPU's integrated graphics before reaching the display. This offers better battery life, but prevents the GPU from giving its absolute best performance. For 2022, ROG is bringing a MUX Switch to the entire lineup, which allows the dedicated GPU to push graphics directly to the display. For competitive games, gamers can enable a direct GPU mode that reduces latency and boosts performance by up to 5-10% on average, with some titles like Rainbow Six Siege seeing more than a 30% boost .

Because this switch has been implemented as a hardware solution, gamers have the option to toggle between modes easily within Armoury Crate. For situations that demand the absolute best GPU performance possible, direct GPU mode can be enabled. When battery life is the priority, this mode can be disabled to extend the laptop’s endurance.