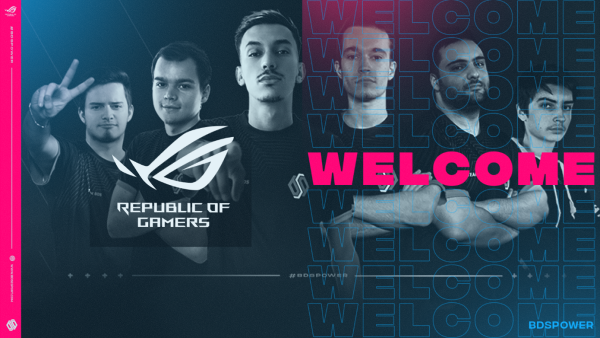 TAIWAN, Taipei, December 14, 2021 — ASUS Republic of Gamers (ROG) today announced an exclusive partnership with Team BDS, one of the world’s most revered professional-gaming squads with multiple high-profile titles to its name — including first-place position in the Rainbow Six European League 2021 (Stage 3).

ROG will support Team BDS with a sponsorship agreement that will see the team’s players and gaming houses kitted out with a cutting-edge armory of gaming peripherals, including the all-new ROG keyboards, mice, mousepads, headsets and gaming chairs.

With the enviable ability to call on the capabilities of the latest world-class gaming gear, Team BDS has a refreshed ambition to accelerate its success through 2022 and beyond. Its triumphs to date are many and varied, encompassing both victories and high-ranking results across many of the world’s leading esports tournaments.

In addition to its world-beating first-place performance at the Rainbow Six European League 2021 event, Team BDS also has squads competing at the highest levels in League of Legends (both the European Championship and Ligue Française), Rocket League, Valorant, FIFA and Trackmania.

As a result of its many successes, Team BDS is already recognized as one of the best teams in Europe – despite having formed only in 2019. With its formidable players and gaming houses, Team BDS aims to become the most successful Swiss-based professional esports organizations on the planet to compete at the highest level of professional gaming.

Commenting on the new partnership between ROG and Team BDS, Rainbow Six manager, Catwo said: ”Performance has been in our DNA since the beginning. We’ve learned through experience that for our players to succeed at the highest levels we need to have the best partnership in place. Small details can make big difference — a fact that ROG understands and embraces. We’ve seen that the brand is always looking to improve its already high level of quality, as well as adapt products to meet our desire to stay at the top of our game in the fiercely competitive world of esports.

Fellow player, Stéphane ‘Shaiiko’ Lebleu, added: “Teamwork makes everything possible. The sum of our individual talents plus the synergy between each member adds up to a huge advantage. Our mission at Team BDS is to support our digital athletes in their personal and sportive development while focusing on delivering strong performance in each competition in which we participate.”

Gear up with ROG: The world’s best PC-gaming peripherals

ROG is renowned as being only For Those Who Dare, and the brand’s sponsorship of Team BDS for the 2022 esports season will equip the elite players with some of the planet’s best PC-gaming peripherals — with the ultimate aim of propelling the squad to even higher levels of success. Specifically, the partnership is currently scheduled to run until December 31, 2022, with a diverse range of ROG gaming peripherals to be supplied to Team BDS players located in both Geneva and Berlin.

Responding to the new alliance, Kris Huang, General Manager of the ASUS Gaming Gear and Accessory Business Unit said: “ROG is honored to join the Team BDS family. Our premium, innovative gaming gear will be supporting some of the finest players in some of the toughest esports competitions, and we look forward to witnessing them perform and succeed on the world stage. We also hope, newly empowered by the latest ROG peripherals, Team BDS will share their experiences with the global esports community — helping to introduce the joy of ROG to more gamers than ever before.”