For Those Who Run Ahead

Powered by a 1.4 GHz dual-core processor, the RT-AC1900P eliminates the performance drops that plague other routers with busy networks. So even on the busiest home networks, HD video streaming is always smooth, the latency low for online gaming and VoIP calls, and file downloads are never interrupted.

The RT-AC1900P also features dual USB ports for file, printers and 3G/4G modems sharing and a USB 3.0 port for up to ten times faster data transfers than USB 2.0.

Exclusive AiProtection powered by Trend Micro™ improves your online safety and security by combining automatic vulnerability detection, malicious site blocking and parental controls, while the ASUS Router app allows you to setup your router, manage network traffic, diagnose connection issues and even update firmware, all without needing to boot up a PC. 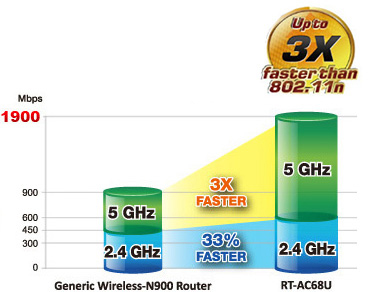 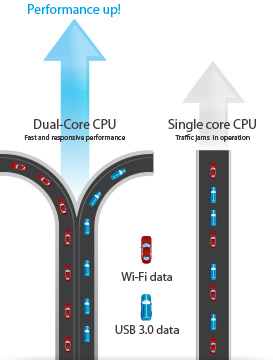 Do more at once with 1.4 GHz dual-core processors inside

The ASUS RT-AC1900P features a dual-core processor that eliminates the performance drops that plague other routers. So even on the busiest home networks, HD video streaming is always smooth, the latency low for online gaming and VoIP calls, and file downloads are never interrupted.

Entertainment everywhere, on every device

Exclusive ultra-sensitive receivers give improved mid- and long-range Wi-Fi signal, with high-powered amplifiers and AiRadar beamforming to deliver unrivaled coverage that's fast, reliable and stable for all your connected devices, from PCs and mobile devices to game consoles and beyond. 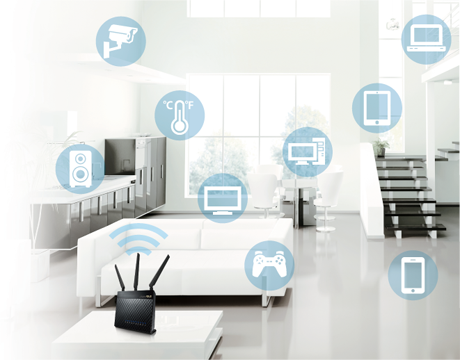 In most cases, your RT-AC1900P can deliver smooth, reliable Wi-Fi to every part of your home. But Wi-Fi coverage can be affected by many factors — room layout, construction materials, and even furnishings. ASUS AiMesh is an innovative new router feature that fixes these problems: it creates a whole-home Wi-Fi network using multiple ASUS routers. AiMesh is powerful, flexible and you can use a mix of ASUS router models — protecting your investment! AiMesh gives you time-saving central control, and seamless roaming capability. AiMesh is Wi-Fi you can rely on — for all your devices, all the time! Learn More 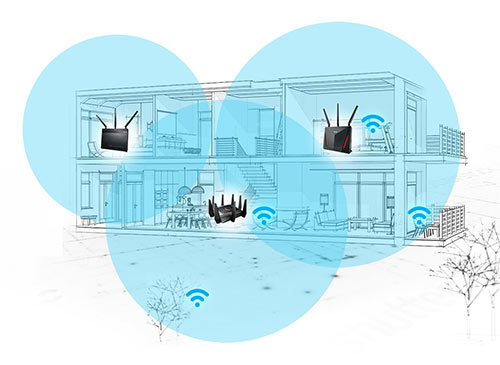 Highest speed USB 3.0 features data transfers up ten times faster than USB 2.0. Two USB ports make the RT-AC1900P perfect for file, multimedia, and 3G/4G sharing, while ASUS AiDisk offers remote access and quick content streaming. Where other routers have their USB ports sandwiched next to one another, both RT-AC1900P USB ports are evenly spaced for easy access to either at all times. 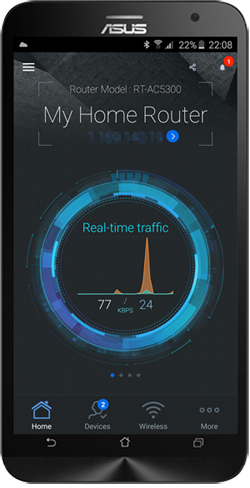 In your increasingly mobile-enabled life, having control over your network via an app is more important than ever. The new ASUS Router App is built from the ground-up to be both intuitive and robust, allowing you to setup your router, manage network traffic, diagnose connection issues and even update firmware, all without needing to boot up a PC.

AiProtection, incorporating state-of-the-art, three-pronged security from Trend Micro™, provides advanced parental controls, blocks malicious addresses and intrusions for your PC or device, and alerts you if an infected device is connected. Potential weaknesses such as password strength and operating system vulnerabilities are also monitored at all times. Moreover, AiProtection even protects Wi-Fi devices without an installable security program such as smart TVs, game consoles, and smart home devices, giving you peace of mind.

Keep Up to Date!

Remember to always keep your device’s firmware up to date so you can benefit from the very latest service and security enhancements — and get exciting new features! Learn more about updating new firmware.